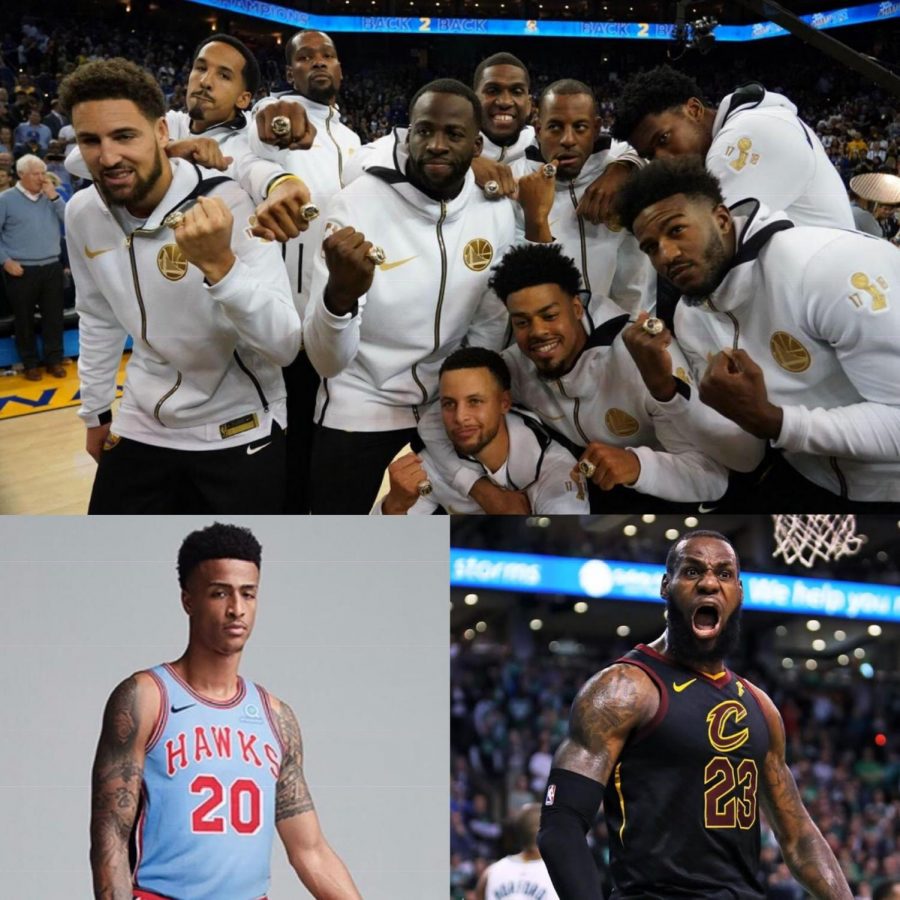 After a brief summer break, the NBA is back with an exciting start to the preseason. Last year, the Golden State Warriors finished their championship season sweeping the Cleveland Cavaliers 4-0. With new rookies, trades, and waiver signings, the NBA offers yet another exciting season to come.

While some teams traded all-star players, other signed free agent players. Lebron James, 3-time NBA Champion, decided to transfer his game to Los Angeles on a four year, $154 million dollar contract deal. He’s joined by point guard Rajon Rondo as well as JaVale McGhee, former Golden State Warrior. In search of an all star center, the Warriors add DeMarcus “Boogie” Cousins, a dominant center from New Orlean Pelicans. Meanwhile, Gregg Popovich and the San Antonio Spurs traded Kawhi Leonard for the Toronto Raptors’ small forward DeMar DeRozan. Other noticeable free-agent pick-ups and trades include the Houston Rockets signing Carmelo Anthony, the Oklahoma City Thunder re-signing Paul George, and the Phoenix Suns signing Trevor Ariza, a former Houston Rocket. With all the different roster changes throughout the league, fans are dying to know: Will one team rise above the others during the regular season?

With a new season comes new rookies, some of which having already benefitted their teams. Trae Young, first round draft pick, averages 15 ppg (points per game) along with a game-winning three from the logo. Texas alumni Mo Bamba averages 11.5 ppg, 6.8 rpg (rebounds per game), and 1.3 bpg (blocks per game). Mo Bamba has also proved himself a worthy shooter from the ark. Slovenian guard Luka Dončić was drafted from the EuroLeague, and he currently averages 15 ppg and 3.5 apg (assists per game) for the Dallas Mavericks. His dominating 61-game performance for Real Madrid led to a EuroLeague title and EuroLeague MVP award, adding to his elongated resumé. Which of these rookies will have the most stellar performance as the season draws near?

This upcoming season unveils both new and classic jerseys. Celebrating their 50th anniversary, dating back from 1968, the Hawks unveil their classic, powder-blue uniforms. The Hawks originally unveiled the jerseys after the relocation from St. Louis to Atlanta. Meanwhile, the Orlando Magic unveil their classic, 30th anniversary, pinstriped jerseys. The jerseys were originally worn by the famous Shaquille O’Neal and Penny Hardaway. On the other hand, the Lakers unveil their new Nike gold jerseys. Designed to look similar to the original gold jerseys worn by Magic Johnson throughout the Kobe era, the Lakers unveil their jerseys with the iconic number of 23.

With an exciting start to the NBA season, some teams already have W’s in their record column. The Boston Celtics hosted the Philadelphia 76ers the other night in yet another rivalry game. However, big performances by Jason Tatum, Jaylen Brown, and “Scary” Terry Rozier III led to a decisive Celtics win. Meanwhile in the San Francisco Bay Area, the Warriors unveiled their 2017-2018 NBA Champion Banner presented during their ring ceremony. The Warriors ultimately won the hard-fought game, with notable performances by the Thunder’s Paul George and the “Splash Brothers.” More recent games include the Cavaliers vs. Raptors, Bucks vs. Hornets, Pelicans vs. Rockets, Timberwolves vs. Spurs, and Heat vs. Magic.

The NBA 2018-2019 season has just begun and is already off to a great start. What teams will topple over the others to become this season’s champion? Stay tuned to find out!