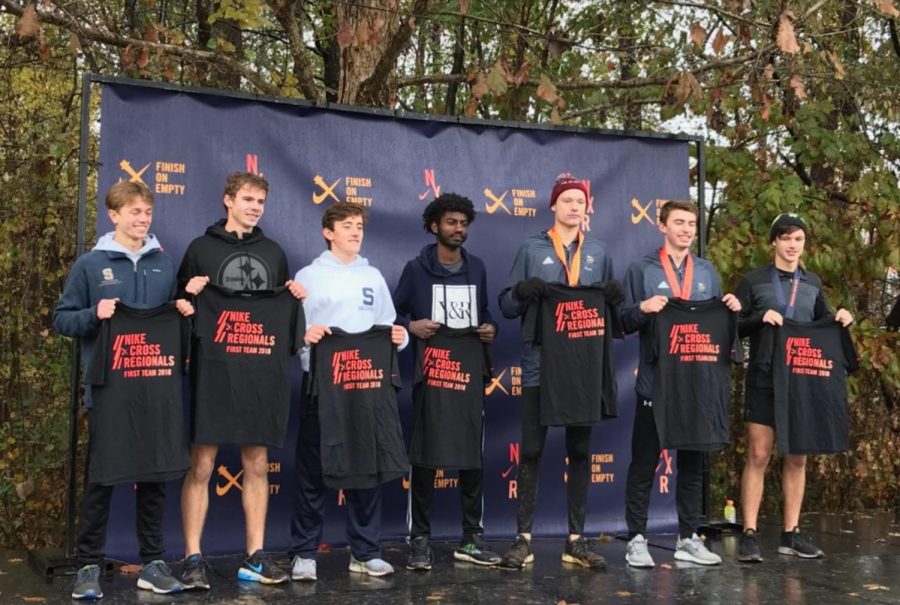 Keehan (third left) and Banko (far left) emerge from North Carolina victorious, ready to show Oregon what Salesianum is made of.

For most of the runners on the Salesianum cross country team, the season comes to a close after the state championships. For others, racing season wraps up at the Nike Southeast Cross Country Regional Championships hosted in Cary, North Carolina. But for two, however, the real challenge is just beginning. Finishing in remarkable 5th and 7th places on Saturday at Cary, Salesianum seniors Michael Keehan and Sean Banko have shattered school history and are both going to represent the ‘S’ at the National Championship in Portland Oregon on Saturday, December 1. Look out Oregon; Salesianum is sending trouble – on the double!

Both Michael and Sean have been running cross country for all four years of their Salesian career, and they have really shaped their performance into the pinnacles of running they are today. From scorching summer runs at Ramsey Road to workouts during torrential downpours, Keehan and Banko have put in the grit and determination to become Delaware running legends. “Only a few guys have ever made cross country Nationals from Delaware, and never two from the same school on the same year,” commented coach Michael LoSapio. “Mike and Sean continue their record setting ways….as a duo! I am beyond proud!” Coach LoSapio has known the two Salesian athletes for over four years, and seeing them develop over such an extensive time is truly rewarding.

Officially the most decorated runners in Salesianum school history, both Keehan and Banko have defied all expectations, won countless state championships over the course of their four years, led the team to an outstanding 10th place at the Nike Regionals last weekend, and are ready to bring their A game to the Oregon trails on Saturday. “The hay is in the barn,” as the popular cross country saying this year goes. The tireless effort and dedication have been put in and the qualifying races have been won. With their final high school race ever looming ahead of them, Michael Keehan and Sean Banko are ready to give it their all, “get the bread,” and represent the boys of 18th and Broom as they cross the finish line at the end of their four-year race.