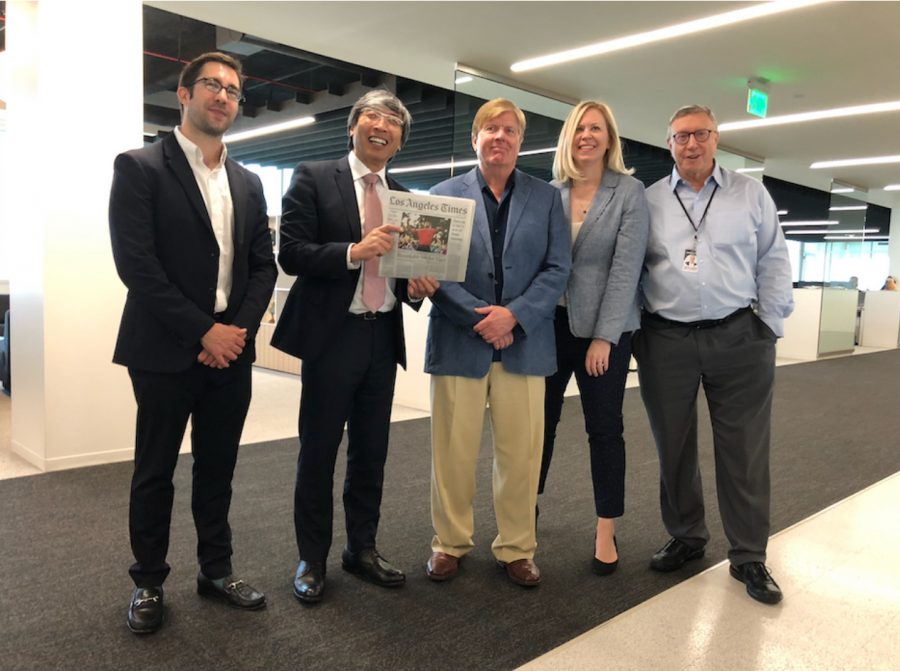 On April 15, the Los Angeles Times was honored with the 2019 Pulitzer Prize for a series of stories uncovering a pattern of abuse and misconduct performed by the University of Southern California’s gynecologist Dr. George Tyndall, who was accused of sexually violating hundreds of clients in the campus clinic. Among the journalists credited with such a prestigious award is Matthew Hamilton, a 2005 alumnus and former journalist for the Salesianum Review. Hamilton’s discoveries prompted federal and state investigations into the case, leading to the resignation of the university’s president and serving justice to those whom Dr. Tyndall had maltreated. From his humble origins at the Review to reaching the peak of professional journalism, Matthew Hamilton is a worthy recipient of the Pulitzer Prize, leaving the Salesianum community beaming with pride.

High school is a time for discovering self-identity and deciding what future one wants to pursue. For Matthew, finding a fitting and fulfilling career took time, as it does for many other Salesians. His future as a journalist was profoundly shaped by writing for the Salesianum Review as well as the many mentors he had as a student. “I remember having really good English teachers,” commented Hamilton. “Teachers like Chuck Selvaggio and Mr. Crawford really helped me learn to appreciate writing and close reading, essential to journalism, and that really encouraged me to follow that path as a student.” Because of the exceptional resources Sallies had to offer, Hamilton found a field he was passionate about. He then went on to study Catholic theology at Boston College and completed a degree in journalism from USC, and has achieved momentous success as the latest recipient of the Pulitzer Prize.

While having such a foundation was impactful in developing such an distinguished career, Hamilton remarks that it was hard work in all of his journalistic endeavors that brought him to where he is today. Hamilton remarked that, “Being introduced to journalism at a young age gave me new opportunities, and these opportunities built on themselves.” When his colleague Harriet Ryan received an anonymous tip that a doctor at USC was abusing his patients, she and Hamilton immediately began researching court records and running “door-to-door,” seeking any information pertaining to this scandal. Hamilton’s zeal is eloquently expressed in the immense effort that goes into developing such a groundbreaking story, reflective of the long and laborious months that led him and his team to writing a powerful and eventually prize-winning piece.

Despite establishing his career in Los Angeles, it is evident that Hamilton has carried the Salesian values so astutely taught at Salesianum from Wilmington to the west coast. Unveiling a string of such heinous crimes holds great magnitude for the USC community, and it is through Hamilton and his colleagues’ diligent work that the voices of these mistreated women can be heard. “I think a part of journalism is recognizing the needs of the community, and if you identify and expose issues that matter, you not only better yourself but also those around you, which really connects to spirituality.” Hamilton’s dedication to accurately portraying the truth greatly embodies that same dedication of St. Francis de Sales, who coincidentally is the patron saint of journalism.

Regardless of any opportunities or experiences that journalism provides, Hamilton commented that the most indispensable tool to a journalist is a passion for the profession. “The best advice I could give is to find the journalism that you love. Don’t be afraid to try new experiences and see if you really enjoy them. To pursue journalism as a career, you have to really love it, and if you do love it, you’ll always have that affinity for the craft to guide you.” Hamilton’s words are sure to greatly encourage aspiring journalists to follow the passion that they hold for writing and ultimately being a voice for the people. The Pulitzer Prize-winning articles of Matthew Hamilton and his colleagues provided this voice, defending the hundreds of women scarred by Dr. Tyndall, and by following Hamilton’s example, the voices of journalists everywhere will incite a deeper meaning to “power of the press.”