Salesianum Tennis Team: Making a “Racquet” on the Court 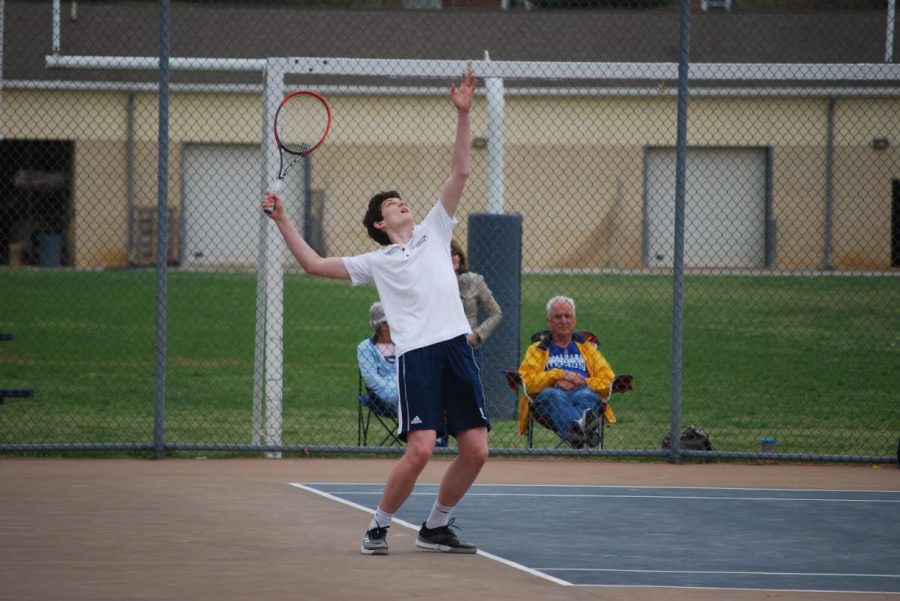 Patrick Deely sets up for a powerful serve against his Archmere opponent.

Spring has sprung, and yet another tennis season has begun for Salesianum. After a great start with a 5-0 victory over Conrad in their first game, I sat down with sophomore Benjamin Green to find out a bit more about the team’s focus, leadership, and brotherhood going into this season.

As for the team’s main practice mentality, consistency is key. Ben stressed that especially in high-school-level tennis, the team would rather have consistently well aimed shots than a few powerful but less reliable swings. This attitude of consistency also applies to the team itself. Ben discussed how every player needs to have well-practiced abilities, as no individual can carry the team alone. Even if an excellent player wins his singles match, he cannot bring the rest of the team to victory in the other four matches. That said, Ben feels that talent is well spread out across the roster this year, and he is confident that everyone will contribute to the team. Each player also has personal practice goals for themselves. For Ben, a main focus is serving, but each team member has some main skill that they want to improve.

Ben says that the Salesianum brotherhood can really be felt within the tennis team. The players are friends on and off the court, and Ben says that the whole team comes together to help everyone grow both as players as well as Salesian brothers. He described how everyone feels a responsibility to guide the new players, especially the freshmen. More experienced players mainly contribute in this regard, and Ben said that Evan Stosic and others could be seen mentoring their teammates at their first match of the season.

Believe it or not, Ben got his start in tennis with the Wii Sports rendition of the game. He said that the video game title got him first interested in tennis, and he started playing the real game a few years later. Ben doesn’t feel that tennis receives as much attention in mainstream media as other sports, and he wants the game to become more well-known. Ben thinks that anyone with any interest in tennis should absolutely give it a go and try to have fun with it.

The Salesianum tennis team has a current winning record of 4-3. We wish Ben and his fellow players good luck for the rest of a great season!