Eagles Ravage the Redskins as They Kick Off the 2019 Season 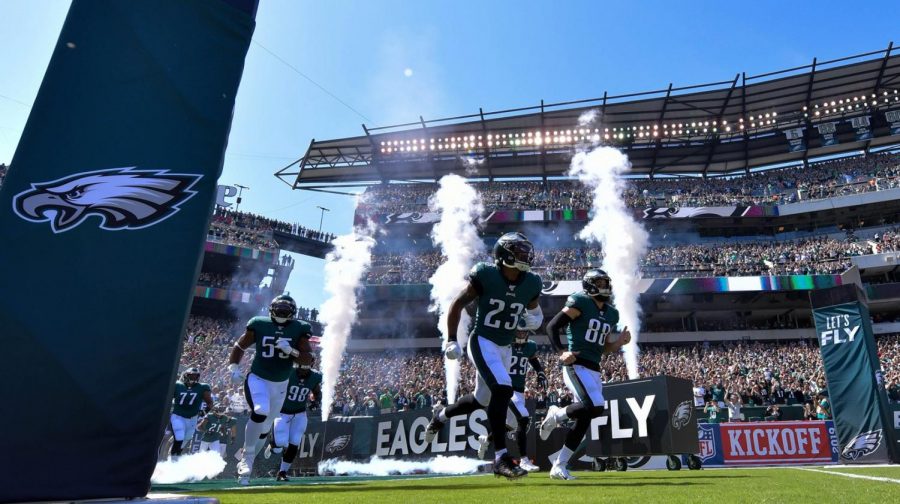 The Philadelphia Eagles fly onto the field ready to kickoff game day against the Washington Redskins.

Philly sports fans everywhere, it’s the moment you’ve been waiting for – the Philadelphia Eagles officially kicked off their 86th season this past Sunday. Facing off against their potent rival the Washington Redskins, the Birds had high hopes. Coming off of a heartbreaking playoff loss to the Saints last season, the team was anxious to get back on the field for the revenge tour. Many analysts were predicting that the Eagles would be the best team in the NFL due to their talented starting lineup and strong bench depth. Fans and players alike were hoping for, and expecting, a Super Bowl-worthy season, only one full season removed from their victory in 2018.

After starting out slow, the Eagles put the peddle to the metal in the second half to beat the Redskins. In the first quarter, Redskins’ TE Vernon Davis broke multiple tackles to score an unbelievable 48 yard touchdown. The Redskins held on to the shutout for the rest of the quarter with kicker Dustin Hopkins sinking a 41 yard field goal.

Following Terry McLaurin’s 69 yard, blazing fast touchdown, the Eagles answered back with a 51-yard deep bomb from Wentz to Jackson. Going into the second half, the Eagles left the field down 20-7 to the Redskins while jeers from the relentless crowd showered down upon them.

In the second half, the Eagles charged onto the field an entirely different team. The fightin’ Philadelphians scored three touchdowns before Washington was able to score again. One such touchdown pass once again went to Desean Jackson for 53 yards. The other two touchdowns were scored by Alshon Jeffery, one receiving and one rushing. Following a late touchdown scored by Washington’s Trey Quinn, the Eagles recovered the onside kick in the final seconds of the game to seize a decisive victory of 32-27.

While the team clearly changed during halftime, so did the attitude of the fans. After Desean’s 2nd touchdown catch, the crowd became ecstatic as he fulfilled his role perfectly. Fans were also excited by the returning-pro Darren Sproles, who provided numerous sparks, as well as Miles Sanders, who showed off his speed and agility.

Students at Salesianum were similarly excited by the Eagles’ performance on Sunday. Senior Dan Bransfield said that the Eagles, “showed flashes of their offensive potential,” while they left a lot on the table. He is hopeful for the remainder of the season, explaining that, “The Wentz Wagon is back!” Another senior at Sallies, Sam Gentilotti, had some positive views on the future of the team: “Desean is back and his impact was felt immediately” and “Miles Sanders is our RB of the future.”

The Eagles will look to stay undefeated as they face the Falcons in Atlanta on Sunday night. With the Eagles against the Falcons, be sure to tune into this battle of the birds!