Sallies Runners Shine in First 5K of the Season 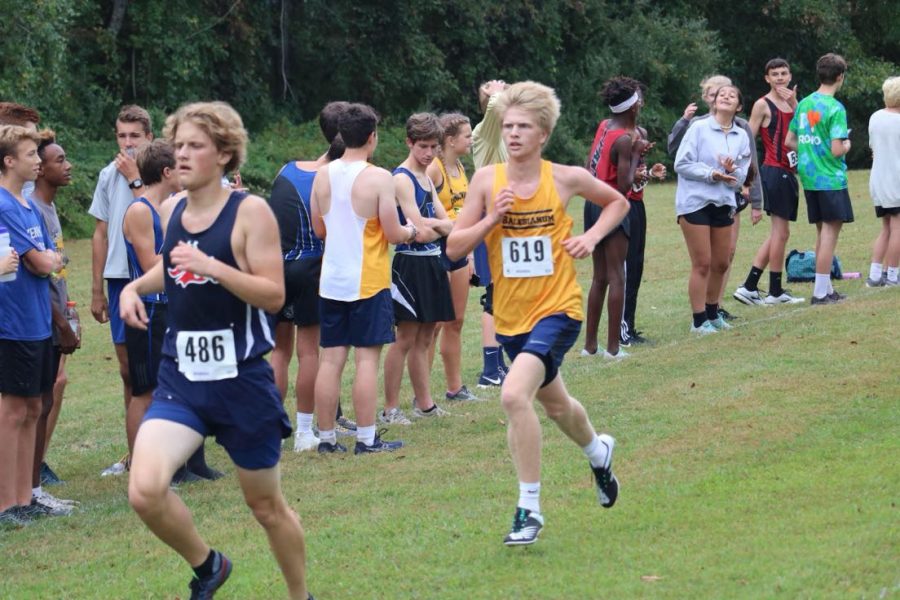 Junior Jack Kohn strides through the final straightaway to procure a personal best for himself and the team at White Clay Creek State Park.

Friday might have looked like a gloomy day to some, but for the Salesianum cross country team, it was a perfect day for running. While the top 22 runners went for a work out at Ramsey Road in preparation for the Richmond Relays, the rest of the team headed to White Clay Creek State Park for the first 5k meet of the year. Racing against 28 other schools, the Sallies runners held their own, with some achieving new personal records.

The freshmen were first up, ready to race their first 5k of their cross-country careers with some running their first 5k ever. On one of the advanced courses in Delaware, the rookies kept pushing through, determined to finish the whole 3.1 miles. Shane McGrellis had the fastest time for the Sallies freshmen, finishing with a time of 20:17.39 and placing in the top 25 for the entire race. “I was surprised that I managed to finish in the top 25, considering that I didn’t really run much over the summer,” Shane spoke on his efforts. “But I think that the practices at Sallies have helped me get faster.”

The sophomores were up next, and with most already having a year of experience under their belt, they showed some major improvements. Donning the golden-singlet once again, sophomore Aidan Lennon breezed through the course with a time of 20:01.05. When asked about what made him prepared for the race, Aidan said that “Over the summer, I trained a lot and I went to the captains’ runs, so I felt like that really helped me feel more prepared for the race.”

Not too long after the sophomores finished, the juniors strided across the starting line and onto the course. They proved to be a great unit, as all 19 runners finished with a time under 24 minutes, procuring paces of less than eight minutes per mile. “I was nervous in the beginning, because there were a lot of people,” Matt Greenley said when I asked him what his first race was like. “But once I got out of the start and found the group that I run with, the nerves went away and I got more comfortable.” After everyone crossed the line, it was Evan Delorme who became the first Sallies runner of the day to break the 20 minute barrier, flying through the course with a time of 19:56.94.

The seniors were the final group to race, and even though there were only 6 runners in golden singlets, they dug in for an outstanding run. Out of the super six, it was 3rd-year runner Jack Kohn who ended up coming through hot, finishing with a time of 19:25.19, the fastest out of all of Salesian runners at this meet. When asked about what this meant for Kohn, he replied, “This year is like a redemption tour for me because a lot of my races last year were not that good. It feels really rewarding to see my summer training finally pay off.”

Despite the top 22 runners not racing at White Clay, the other 69 runners were able to shine and remind everyone why Salesianum is still a cross country force to be reckoned with!