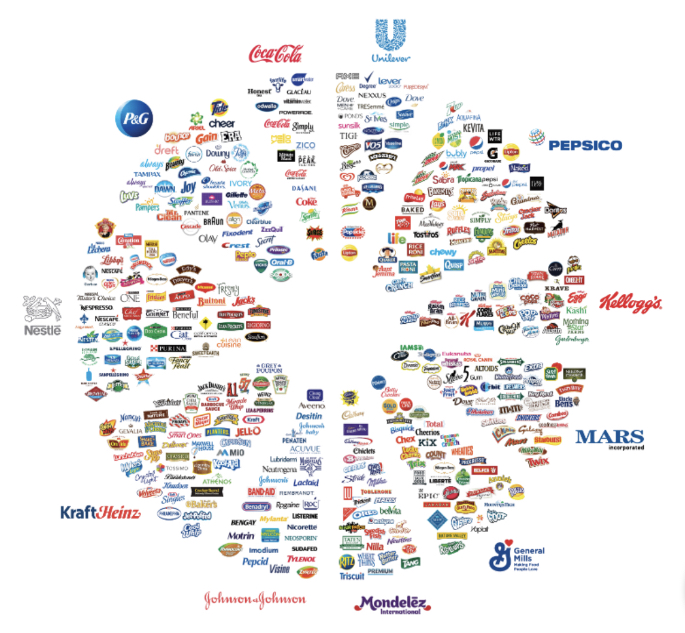 Corporate conglomerates such as P&G and PepsiCo. largely manipulate the markets, directing consumers into their sizable sphere of influence.

So, what if I told you right now that two-thirds of what you buy in the supermarket comes from only ten different companies. Well, that’s true: Cheetos, Pepsi, Quaker Oats, Doritos, Mountain Dew, Tostitos, and Lay’s are all made by the same company: PepsiCo. I’d like to focus on a couple of these conglomerates as well as how incredible it is that some of these companies work. I would like to focus on Kellogg’s and Procter & Gamble. I will look into how these companies work, what they do, and what brands they own that you never knew they own. I love learning about the illusions of choice that large companies give you. It’s fascinating seeing which brands I love are actually just a part of a massive wholesale conglomerate that I bought into thinking that the brand was its own separate operating company.

It’s incredible that a single company can own things that are so radically different from each other, but still knows how to manage most of the brands it acquire. For example, Kellogg’s is a cereal company and has been for most of its history. They own major cereal brands, like Frosted Flakes, Raisin Bran, Mini Wheats, and Special K. Whats fascinating is that they were still just a cereal company when they bought Keebler. They assumed the marketing and manufacturing of Cheez-its and Club crackers and making Pop-Tarts and granola bars. The challenge for a cereal company is knowing how to market and manufacture something that isn’t cereal, because that’s all they know. They now have to hire people to manage the cracker business and the granola business so they can make the most of their new properties. It looks as though Kellogg’s has struck a balance of resource management and brand development. It is one of the best examples of the problems and the difficulties of running a conglomerate. But when it works, and a conglomerate can run multiple million-dollar brands and pull in their profits, it pays off exponentially.

Procter and Gamble, widely known as P&G, is an amazing company and a colossal conglomerate. It almost monopolizes some of the areas of the home and personal care section of the supermarket entirely. In fact, it own the biggest brands in their respective categories and are able to manage all of this under one company, keeping focus and balance. Last year P&G brought in revenue of $9.75 billion.

P&G owns brands you have probably previously thought to be competing with each other. It controls a huge portion of the home care and personal care section, owning a ton of laundry detergent and fabric companies like Tide, Bounce, Downy, and Gain. Also in the cleaning department, P&G owns Cascade, Dawn, Febreeze, Ultra Joy, Mr. Clean, Swiffer, and Comet. After that comes personal care – Bounty, Charmin, and Puffs all in the paper towel category. P&G also owns Luvs and Pampers, two of the largest diaper companies in the world. It owns shampoo and skin care brands such as Head and  Shoulders, Pantene, and Old Spice. Furthermore, P&G also owns Gillette, Pepto Bismol, Vick’s, Crest, Oral-B, Scope, and Olay. Obviously reciting the rest of this billion-dollar laundry list would take an eternity, yet it’s incredibly interesting that all of the big name companies are owned and operated under one umbrella called Procter and Gamble. Again, conglomerates like these are astonishing in the way that they can operate everything in such an efficient and productive way. Companies like P&G are immensely powerful, giving them huge control and influence over the markets they operate in. P&G as it stands will continue to dominate for decades to come as one of the largest conglomerates in the world. It is, without a doubt, the powerhouse in the home and personal care market.

The average American doesn’t typically know that these conglomerate brands aren’t independently owned companies. Consumers have little to no choice as to how they support companies when they don’t know details like this. One may think that companies like Burt’s Bee’s are little darling companies, that Burt’s Bees markets itself as wholesome, pure, natural, small, and homegrown. In reality, Burt’s Bees is owned and operated by Clorox, which is a chemical, bleach, and baking soda company at its core. What I’m saying is, the way Burt’s Bees markets itself and what it wants the customer to perceive into is completely different from what you are actually buying into. One may think that he is supporting a natural, eco-friendly company when in actuality the “company” makes bleach and baking soda. Before Burt’s Bees was bought it was as advertised: small, homegrown, and close to home. Yet when Clorox bought it, it most likely lost the truth in those values and beliefs because now it’s part of a large conglomerate, not a family business. Clorox deliberately markets Burt’s Bees as a cute, homegrown company so the paying public doesn’t associate its chapstick with something unappealing, like a bleach-focused conglomerate.

Conglomerates control many different things and hold a significant amount of power, with some people even saying they hold too much power. Regardless, they are fascinating and can show you so many things about economics and the way companies work that you may have never thought about. If you want to know which brands are parts of conglomerates, you can do two things. Look for something on the back of the box that looks like a conglomerates logo or website. Thank you for reading my first ever article at the Salesianum Review and I look forward to creating more incredible content in the future.