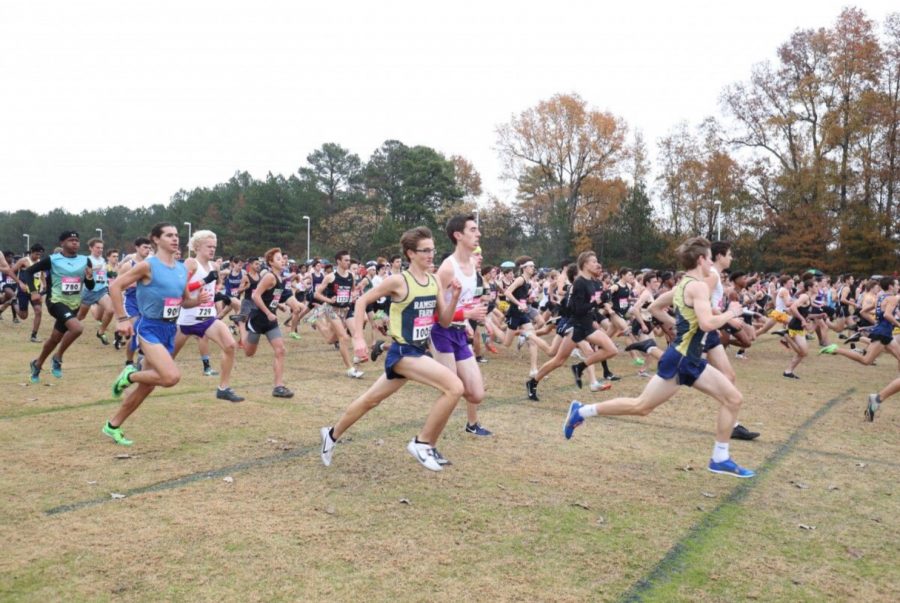 Ryan Banko (1005) strides out at the start of the championship race.

While many Salesian students enjoyed the comforts of their families and homes during this past Thanksgiving break, 23 runners on the cross country team headed down to Cary, North Carolina to race as Ramsey Farm in the Nike Southeast Regional. Across the board, this meet is not something to take lightly, as it features some of the best runners in the region and a notoriously-fast course. Combined with the 40-degree temperature and steady rain, the race proved to be one of the most challenging of the season. The first batch of runners raced in the 2nd Boys Invitational, and they ran together well despite the conditions being rather unfavorable. The first Ramsey Farm runner to cross the finish line was Brendan Clerval, who had come back earlier this season from a meniscus injury. He placed at 115th and gained a new PR of 17:51. Also finishing in the top 200 were Joe Fielding, Matt Deckers, Christian Nichols, Drew Holmes, Andres Samson, and Aidan Ward.

The varsity runners closed out the day by racing in the Boys Championship, and against some of the best runners in the region, they held their own. The first runner in blue and gold to cross the line was Ryan Banko, who placed 69th and PR’d with a time of 16:00. Closely behind him was this year’s individual State Champion, Aidan Higley, who finished with a time of 16:08. Overall, Sallies had a great conclusion to another strong season at NXR, displaying great times in both races. The trip also served as a great way for the runners to strengthen their Salesian bonds, and they hope to continue those bonds into the winter track season.