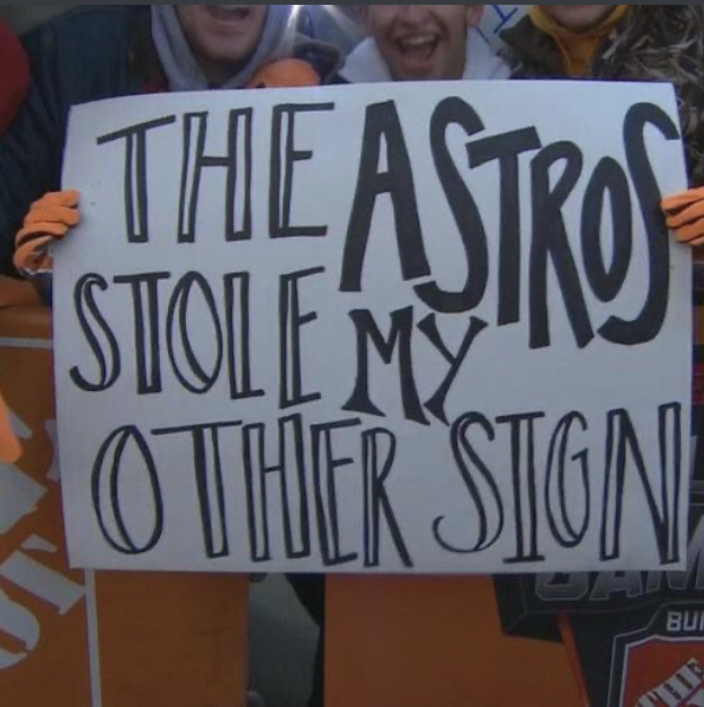 A few weeks back, the baseball world was shaken when an article from the sports journalism website, The Athletic, shed light on a situation that will taint the Houston Astros’ reputation for years to come. The article brought forth allegations, evidence, and firsthand accounts of Astros using illegal methods to steal signs from the opposing team. This would allow the Astros to know exactly what the pitcher was going to throw next, therefore giving the Astros the upper hand at the plate. Sign stealing is not illegal; it’s been part of the game for years. What is illegal is using electronics, as well as cameras, to aid them in stealing the signs. It’s actually written down in the MLB rulebook that using electronics to steal signs is illegal.

This is also not the first time this has happened. The Boston Red Sox were caught using Apple Watches to steal signs in 2017, resulting in a hefty fine. Allegations similar to this have been made against the Astros before. The White Sox and Yankees have both stated that they heard suspicious whistling in the dugout. Those allegations were soon brushed over without much attention given to them. All of this may seem like  circumstantial evidence, until incriminating evidence started pouring in after The Athletic article was published. Firsthand accounts from players, photos, and video evidence, all pointed towards a problem larger than baseball. Even more troubling is that the Astros won the World Series in 2017, the year in which the Astros were accused of cheating. The evidence is irrefutable, at this point. The general consensus among baseball fans is that the Houston Astros have undoubtedly cheated and need to be punished. But before the conclusion is reached, an in-depth look at the evidence is necessary.

Perhaps the most incriminating evidence is the confessions from the players. Mike Fiers pitched for Houston when they won the World Series in 2017 and was traded following the season. In short, he accused the team of using centerfield cameras to steal the signs, whose feeds would be passed to a TV near the dugout. When the player was at the plate, Fiers said they would bang on a trash can, whistle, and use a number of different tactics to signal to the batter what was coming next. This could only be done at their home ballpark so cheating could only be done during half of the regular season games. Fiers, and many other former Astros players have quietly told their current teams to watch out for sign stealing at Minute Maid Stadium. Fiers, along with a White Sox pitcher, have stated that it was widely known among teams what to watch out for sign-stealing in Houston. It seems that teams already knew of foul play, putting oil onto this raging fire. All of these players’ accounts have made this situation clearer, and provide a much better description of the deep scheme.

It didn’t take long after the story broke for people to look back at footage from 2017 to spot irrefutable evidence of foul play. In one video (you can watch here), banging is heard in the background that correlates with the pitch being thrown. There is no way those signs could be stolen that quickly and that precise without cameras or other devices. Photos of the dugout tunnel show a trash can with pretty clear marks of a beating. There are also photos that also show a television with a communications set right next to the dugout, proving the Astros’ guilt.

What’s next for baseball? Well, the MLB is currently investigating the matter, interviewing players while reviewing evidence. A punishment is imminent but the question is how severe it will be. Rescinding their World Series title could be in discussion. Additionally, the legitimacy of some wins will be questioned. Even weeks later, more evidence and allegations have come up. A few days ago, the Yankees accused the Astros of cheating using blinking lights in this year’s ALCS. More and more, the situation looks bad, and a large fine and suspensions will be necessary. This is bad for baseball, bad for Houston, and bad for the integrity of the game. This question remains to be answered: Was cheating really worth it? What kind of punishment will be enough? What’s next for baseball? Only time will tell.