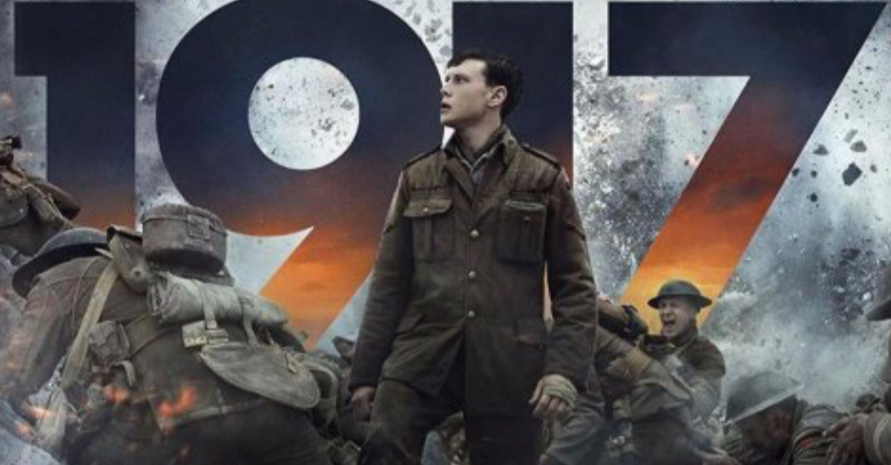 While not entirely certain, it is estimated that about forty million soldiers across thirty-two different nations lost their lives in World War I. For any type of media to try and represent the struggle of war in general, let alone this one in particular, without creating something disrespectful is a truly monumental task. There are an overwhelming number of aspects to the scale of the battles that need to be addressed, such as the tedious yet brutal trench warfare and the horrific sights in “no man’s land” between opposing armies.

Director Sam Mendes, inspired by the stories of his grandfather who served in the British Army, took up this challenge in a unique, pain-staking way that allows the audience to fully immerse itself in the horrors of the First World War. By working with the award-winning director of photography Roger A. Deakins, Mendes and his crew were able to give their film the illusion of being shot entirely in one take. To shoot an entire scene without cutting is already strenuous on its own, but some would say that filming an entire movie in this way is impossible. Mendes and Deakins are the next in a short line of brave filmmakers who have attempted this technique, and the result is something truly astounding. While the entire film isn’t actually one singular shot, as there are various moments where the scene goes black briefly or the camera moves behind a large object before cutting, the illusion that it creates allows for a much deeper immersion into the two soldiers at the forefront of the film’s narrative.

The cinematography doesn’t take the easy way out, either; the camera crew is able to move along with the film’s protagonists in creative ways that also manage to showcase clever visual storytelling. One sequence involves the two soldiers, Schofield and Blake, walking around a muddy pond in no man’s land. Instead of following them from behind as they go around, however, the camera glides across the pond without creating any ripples to showcase the dead bodies that lie inside it. It’s this level of detail that elevates the cinematography from just being a “gimmick” into something truly admirable. Additionally, the camera is able to dynamically frame itself depending on the situation to create a number of memorable, visually appealing “shots.” This is most noticeable during a lengthy sequence that takes place in the town of Écoust at nighttime. It is entirely lit by fire and flares shot into the air by German soldiers, and Schofield attempts to use the limited shadows to avoid getting shot. Each moment of this visually stunning section of the film perfectly showcases the mastery with which Deakins was able to capture this war.

These technical achievements, however, take great priority over the other aspects that make up 1917. It was clear from the start that this was going to be a technical movie through-and-through, but beyond that there isn’t much to latch onto in terms of a gripping narrative. The audience watches Schofield and Blake traverse across desolate battlefields and countrysides to try and deliver a message, one that will hopefully prevent the deaths of 1,600 soldiers, including Blake’s older brother. Besides this basic premise, the film doesn’t make much of an effort to develop an interesting story or set of characters, beyond a few bits of background history or personality traits. The soldiers have brief discussions about their personal lives during various traveling sequences, but whenever they encounter a new obstacle, the film’s dialogue becomes secondary to the visuals. Mendes wants to have it both ways: he wants to tell a dramatic, character-driven war story, but also wants to create a technical masterwork. And unfortunately, the movie puts a much heavier focus on the latter.

It’s difficult to truly care about either Schofield or Blake on more than just a surface level. There are effective emotional moments sprinkled throughout the two-hour runtime, but the characters don’t dwell on them for very long. This doesn’t have to be a sprawling or complicated narrative; a simple story would probably be much more effective for a war movie like this, except it needs to have a stronger hook. Without fully-realized characters, 1917 feels almost lifeless, but perhaps that was Mendes’ purpose. Maybe his goal was to allow little time for viewers to emotionally connect with the story as a way to show how stressful war is, similar to Christopher Nolan’s Dunkirk from 2017. In any case, this film is certainly a technical marvel in terms of its production design, sound and film editing, and especially the cinematography. It’s just a shame that those things take priority here instead of a memorable narrative, which is what people truly remember war films for.