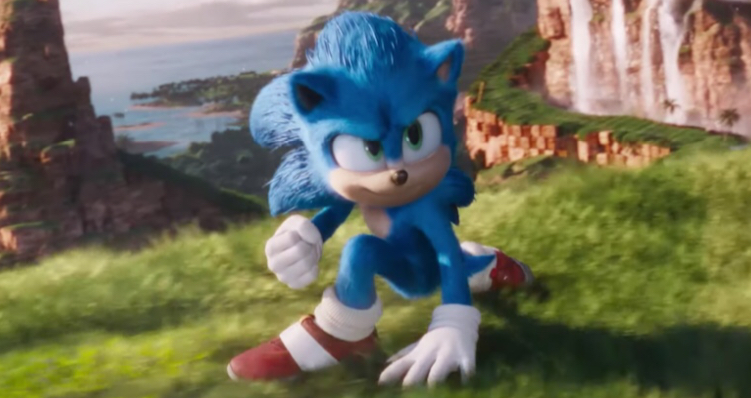 On April 30, 2019, one movie trailer broke the internet. Uploaded on Paramount Pictures’ official YouTube channel, the first look at Sonic the Hedgehog (2020) showcased a character design for Sega’s mascot that was widely criticized, laughed at, and memed by millions of viewers. The reception was so overwhelmingly negative that an announcement for the film’s delay into early 2020 was made, stating that the animation team would be spending this time to rework the CGI into something more true to the original character. Ironically, after all of this controversy, Sonic the Hedgehog ended up being one of the better pieces of media involving the blue blur in the last fifteen years.

After months of work on redesigning Sonic, the VFX crew delivered a character model with surprisingly good results. One of the film’s few strengths is the way the blue hedgehog looks and moves around, which is much more true to the character’s design in the video games. But make no mistake, this was not an easy process for the hardworking animators for this project. The delay into this February gave them five months to fix Sonic’s design, which involved heavy periods of “crunch” (work weeks with hours typically ranging from 70 to 100 or more). This was also the final nail in the coffin for the Vancouver-based Moving Picture Company, which has worked on the VFX for various films, resulting in the studio’s closure and over 800 workers getting laid off.
While the hundreds of talented animators that were forced to undergo harsh work shifts, it seems that the visual effects were never the film’s greatest problem to begin with. For the most part, Sonic the Hedgehog is a generic adventure comedy that lacks any real soul or effort. After a brief opening explaining Sonic’s backstory, which takes itself very seriously, the movie jumps into the hedgehog’s life on Earth and his obsession with the life of small town police officer Tom Wachowski, played by James Marsden. He doesn’t know of Sonic’s existence until the meddling of Dr. Robotnik, played by Jim Carrey, forced the unlikely pair onto a road trip to San Francisco.

These two characters never have much of a connection or chemistry throughout the entire film. Tom has no reason to aid Sonic in escaping Robotnik’s evil clutches, but he does so because the plot needs him to and nothing more. This causes him to become seen as a domestic terrorist by the U.S. government, which has allowed Robotnik to go after Sonic, and Tom’s picture is spread across news networks in the country. The film tries to act like it has a sense of urgency, but the writing never actually follows through with it. As soon as the main conflict gets rolling, Sonic and Tom take a stop at a bar for some silly shenanigans. This is being done while they’re still on the run after being outed as criminals. Because of the lack of attention to a consistent structure, it is difficult to be even mildly interested in this film.

The problems with the script don’t stop there. Admittedly, there are a number of clever jokes sprinkled throughout the 99 minute runtime, but the majority of the writing is fairly obnoxious or dull. Sonic’s whole shtick involves cracking one liners and talking about how fast he is, which gets old after he meets up with the human characters. This creates a stark contrast with the more “emotional” moments, which are laughable in-part due to the over-the-top voice acting for Sonic done by Ben Schwartz. And then there’s the numerous product placements. From one character expressing her love of Zillow to multiple Olive Garden promotions (Sonic and Tom even recite the restaurant chain’s slogan word-for-word), the movie almost presents itself like a YouTube video with several different ads.

About the only interesting aspect of the narrative is Jim Carrey’s Robotnik, reminiscent of his wackier comedy roles from the past. Much of the genuine laughs that this film provides come from his character, and if these lines were improvised it would not be very surprising.

Sonic the Hedgehog most certainly could have been much worse, and perhaps with the original design from that fateful first trailer it would have been. At the end of the day it joins the pile of mediocre video game movies that came before it, despite having some minor redeeming elements. Fans of the blue blur may find enjoyment in seeing their favorite hedgehog run around on screen and do his thing, which must seem refreshing to them after the long line of disastrous titles that this character has been through, but putting on a Sonic video game at home would seem like a much better idea instead.