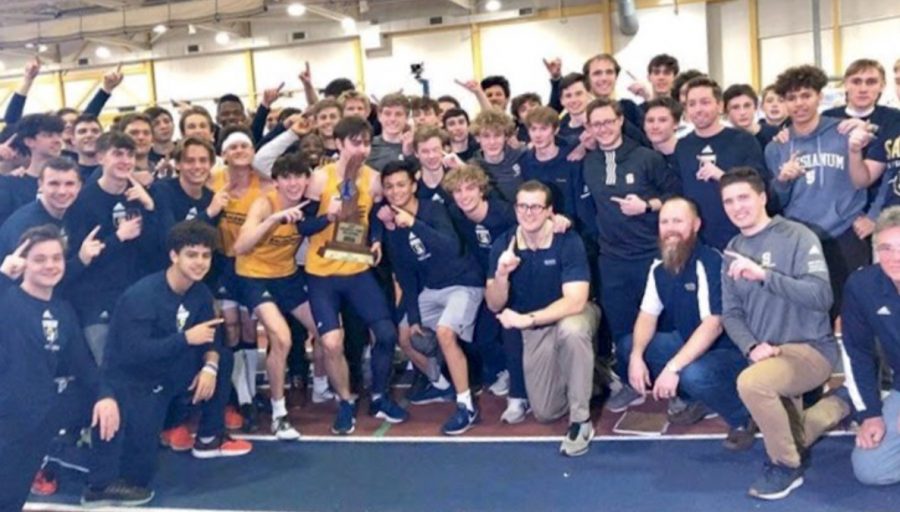 Members of the Salesianum Winter Track Team pose for a picture with the trophy after earning their 11th State Championship.

Leading up to Saturday’s DIAA indoor track state championship meet, there were multiple schools that were vying for that elusive Delaware-shaped trophy. However, Salesianum, trying to avenge last year’s loss, proved to everyone that they had talent across all events.

The first set of runners to put points on the board for the Sals were the 4x800m team, which consisted of Matt Filliben, Matt Ryjewski, Conor Ryan, and Luke Riley. Together, they finished first with a time of 8:18.42. The next relay to take the track would be the 4x200m team, with Amari Mathis, Drew Stokes, Michael Portale, and Markos Duey finishing 3rd overall with a time of 1:35.69. Meanwhile, as the golden singlets were flying across the track, there were other Sallies athletes who were participating in the field events. Matt Klous and David Monge both vaulted over 11 feet, which was enough for them to finish 5th and 7th overall, respectively. Dominic D’Amico and Jack Roddy also performed well in shot put, as both of them threw over 39 feet and finished 7th and 11th, respectively. As for the rest of the runners, they would continue to shine as the afternoon went on. In the 1600 and 3200, Ryan Banko, Aidan Higley, and Michael Migliore showed that they could hang with the best in the state, as the trio placed in the top 8 for both events.

Leading up to the final event, Salesianum was in a tight race for the state championship, as Smyrna and Sussex Central were behind by only 6 points. However, the 4x400m would end up being the deciding factor in who would come out on top. For the Sals, Andrew Mancini, Luke Riley, Conor Ryan, and Michael Portale put together one of the best relays in team history and sped to a decisive win with a time of 3:36.09. Although that time only gave them a 3rd place overall finish, it was just enough to earn the whole team their 11th DIAA Indoor Track State Championship. As the Sallies athletes took the track afterwards to collect their trophy, one could really feel the Salesian brotherhood between the team.