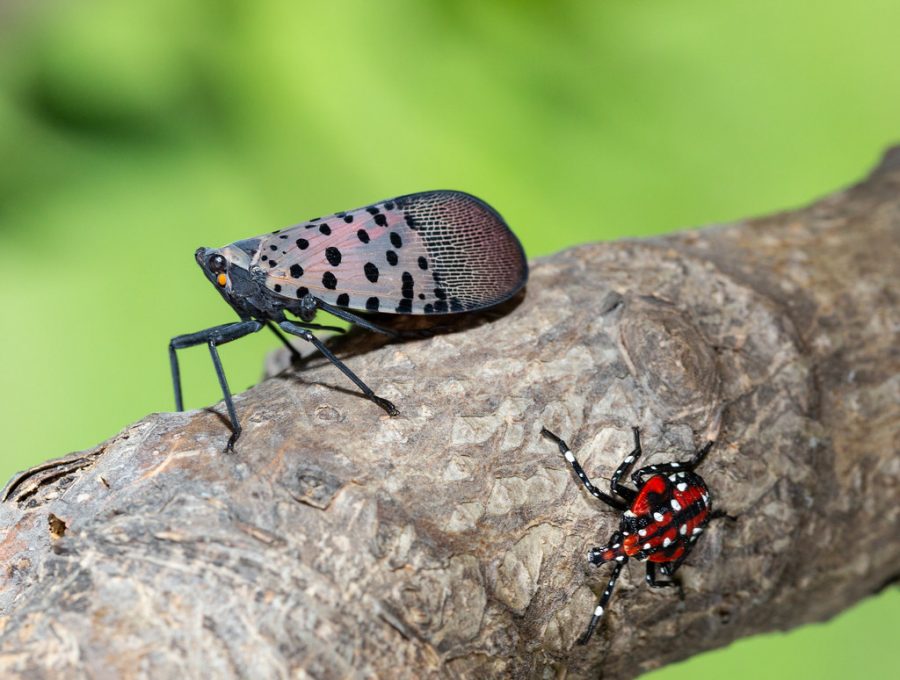 Salesianum students may have noticed a new face wandering outside the school recently, joining them for lunch or perhaps on their car rides home. Actually, it’s a couple thousand new faces: the spotted lanternflies, which are proving to be pests not just at the school, but throughout the entire state of Delaware and the region.

Indigenous to China, Taiwan, and Vietnam, these planthoppers have spread invasively throughout South Korea, Japan, and the United States. It is believed that they were first transported to this country via an egg mass in a 2012 stone shipment from Asia. Spotted lanternflies were first seen in the U.S. in Berks County, Pennsylvania back in September 2014. From there, the species was confirmed in New Jersey, New York, and Virginia in 2018, and Delaware in 2019.

These insects are easily identifiable due to their spotted wings colored gray, black, white, and bright red. As Dr. Anthony explains, “Spotted lanternflies damage many economically important plants,” such as grapevines and fruit trees, “by feeding on their sap…[they] also secret a sugary substance, called honeydew, that causes black mold to grow.” Although this mold isn’t harmful to humans, it is severely damaging to plants.

Dealing with these pests is a strenuous task for many, especially farmers who need to protect their crops. There are ways for us as a Salesianum community, however, to do our part (many of us have already taken action, as seen by the numerous dead lanternflies lying throughout the parking lot). “At this time of year, the lanternflies are beginning to lay their eggs,” says Dr. Anthony. “If you see an egg mass on a tree, rock, or other hard surface, scrap it off and place it in a bag with hand sanitizer to destroy the eggs.” Alternatively, smashing the egg masses is also effective. She additionally stresses that removing a single female from the population could prevent over 100 eggs from being laid.

Spotted lanternflies are rapidly spreading across the country, and their effects on the environment could be catastrophic if limited procedures are taken. Perhaps if we do what we can within the Salesianum community, we could make a small but vital impact.