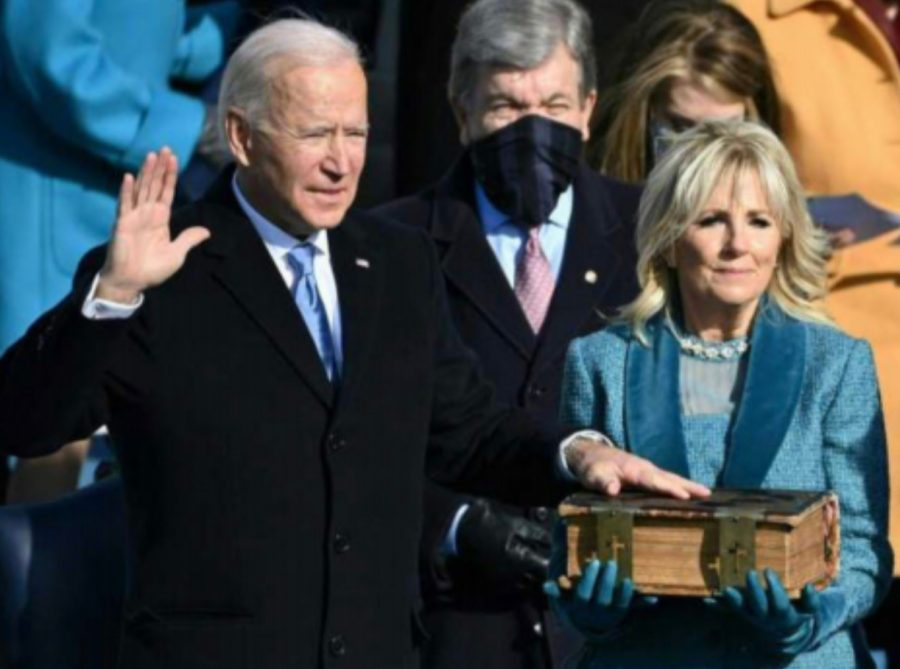 Just after 8 AM on Wednesday, with Marine One waiting on the South Lawn, Donald Trump emerged from the White House for the final time as president, briefly acknowledging reporters before boarding the aircraft bound for Joint Base Andrews. Waiting for him at Joint Base Andrews were family, staff, and supporters as well as Air Force One, which would shortly take him to Mar-a-Lago in Palm Beach, Florida. Here, the president plans to spend his days after presidency.

In a speech at Joint Base Andrews, Trump touted his administration’s accomplishments, citing the nomination of conservative judges, development of a coronavirus vaccine, and strength of the economy, pre covid.

“It’s been something very special. We’ve accomplished a lot.”

He finished the speech by declaring that, “We will be back in some form,” igniting speculation that Trump may be considering another presidential run in 2024.

Roughly twelve miles northwest, the Capitol prepared for an inauguration like no other for a variety of reasons. Washington, D.C., in anticipation of possible violence and riots, held around twenty-six thousand troops, more than the total amount of troops currently stationed in Syria, Afghanistan, and Iraq combined. In addition to this, the coronavirus pandemic prompted Washington D.C. mayor Muriel Bowser to encourage Americans to stay home from the event that often hosts anywhere from two hundred fifty thousand, to two million people during a normal election year.

“I want to reiterate my request to Americans to enjoy this 59th inauguration of the president of the United States and the vice president of the United States at home. Enjoy it virtually on January 20th,” Bowser said in a press conference on the Friday before Inauguration Day. “We know this is the right request for our public safety and our health.”

Americans, for the most part, respected this request and an extraordinary arrangement of flags stood in front of the Washington Monument where people would normally stand to watch the incoming president and vice president take the oath of office. The oath of office was special this year for a number of reasons but was especially historic for Vice President Kamala Harris. Harris was sworn in as the first female vice president as well as the first Black American and first person of South Asian Descent. In her first speech as vice president Wednesday night, Harris preached a message of unity and tenacity.

“We are bold, fearless, and ambitious. We are undaunted in our belief that we shall overcome, that we will rise up. This is American aspiration,” Harris said.

Moments after Harris was sworn in as the 49th vice president of the United States, Joe Biden stood to also take the oath of office with his left hand rested on the same 1983 edition of the Douay Rheims Bible that he used while being sworn in as vice president in 2009 and 2013. An Archmere Academy and University of Delaware graduate, Biden becomes the first ever president to hail from Delaware, a state that he says “has taught us anything is possible, anything is possible in this country.”

In addressing the many worries that lay on the mind of the everyday American today, Biden explained that, “The answer is not to turn inward, to retreat into competing factions, disrupting those who don’t look like you or worship the way you do, or don’t get their news from the same sources you do.” Continuing with a message of unity Biden declared, “We must end this uncivil war that pits red against blue, rural versus urban, conservative versus liberal. We can do this if we open our souls instead of hardening our hearts.”

Biden later joined his family for the traditional parade from the capitol to the White House, one that was of course scaled down this year given the circumstances. President Joe Biden and Vice President Kamala Harris now get to work to pursue ambitious goals to fight climate change, restore a strong economy, and to execute a plan to fight the spread of the coronavirus, among other things.