“I thought I was following my President”: The Prosecution Rests Their Case In the Trump Impeachment Trial 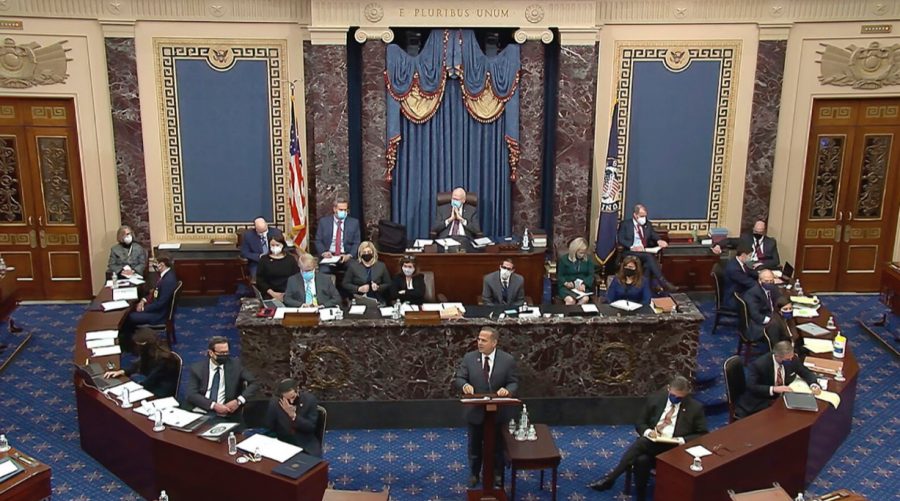 On January 6th, a large crowd of insurrectionists stormed the Capitol Building, resulting in the death of five people. Earlier that same day, then-President Donald Trump was giving fiery speeches telling his supporters to “fight like hell.” A week after this violent attack, Trump was impeached by the House of Representatives. This decision made Trump the first President ever to be impeached twice. Despite the fact that Trump left office on January 20th, the Senate has opted to continue with the impeachment process. This is a controversial decision, given the fact that the primary purpose of impeachment is to remove a person from office, and does not actually result in any federal punishment. It is widely believed that officials are continuing with this process to both set a precedent that presidents cannot commit crimes at the end of their terms and to prevent Trump from running for office again, which is a secondary effect of being convicted after impeachment. On January 25th, the articles of impeachment were officially brought before Congress. The next day, Senate Republicans attempted to dismiss the articles as unconstitutional, since Trump was no longer in office. That motion was denied by a vote of 55-45.

The trial officially began on February 9th. Before that date, both sides had written lengthy papers explaining their arguments. The prosecution claimed that Trump directly caused the riots, while the defense claimed that this impeachment was a partisan attack and that Trump was not responsible for the riots. Before the official arguments could begin at the trial, the Senate had to vote on whether or not it was constitutional to impeach Trump after he left office. The Senate voted that they could impeach Trump by a vote of 56-44. This vote was different from the vote that occurred on January 25, since the Senate was then voting on the Republicans’ motion to dismiss the case. After that vote occurred, the arguments could begin.

Yesterday, February 11th, the prosecution presented their arguments. They utilized interviews with the rioters from January 6th to prove that Trump was directly responsible for the riots. In one of these interviews, an insurrectionist from Texas said, “I thought I was following my President, I thought I was doing what he asked us to do.” After a day of presentation, the prosecution rested their case. In the coming days, we will soon find out what will happen in this historic case. Until, then, there is nothing we can do but wait.