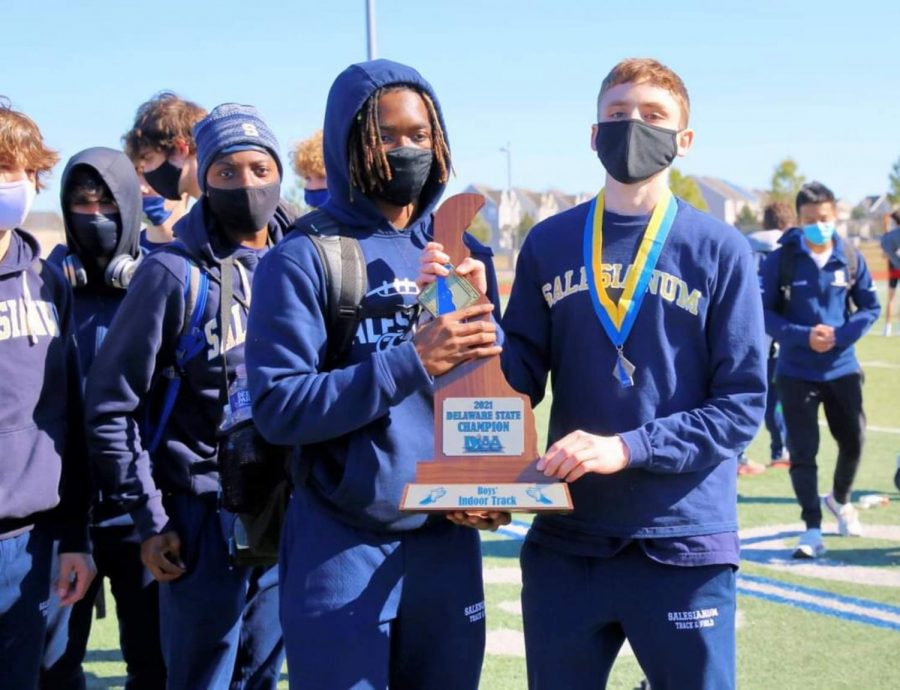 The Salesianum Indoor Track Team has not had a normal season this year due to COVID. They have had only small meets, and there have not been any big competitions this year. Some of the people who are part of the team have said they like Winter Track, but when they heard that they would not be having any big meets this season, they were disappointed. Many runners, however, have not given up hope, for they still think they may eventually find a way to have a bigger meet.

To find out exactly how they felt after their season this winter, I interviewed some of the players to get their take on the situation. Among them, I interviewed the captain of throwing, Edison Pard, who is a member of the Class of 2021. In response to my inquiry about what many runners are looking forward to at this moment, he commented “now that the winter season is almost over, I am looking forward to the spring season… just because discus is my ‘bread and butter’ rather than shotput… and I think we will end off good for what the season has shown us already.” I cannot wait for the spring season to watch him out there with the discus.

I also interviewed a freshman, Bishop Lane, who sprints and is a member of the Class of 2024, to see how he feels about the fact that meets have had reduced size due to COVID. In response, he explained that, “It’s pretty lame, we don’t really get to play the sport, and it can lessen our chances of getting into a college possibly.” Hopefully he gets to actually play the sport like he wants to and have fun. I also interviewed one last freshman, Jasyn Truitt, sprinter and member of the Class of 2024, to ask him whether he’s had a different experience since he’s only freshman. He said, “For sure, as [with] the indoor season, I’m very used to running inside where it’s warmer… but I [now] have to wear more clothes since we are outside, so it’s definitely a different experience as a freshman.” His input affirms my assumptions that freshmen have had a different experience on the team than other classes, but hopefully as it gets warmer, he can warm up easier and sprint even faster. In conclusion, the winter season was different for the squad but they are just thankful to be out there–they are ready for the spring season to get started.