An Interview with Mr. Kennealy: Reflections On Success And New Beginnings 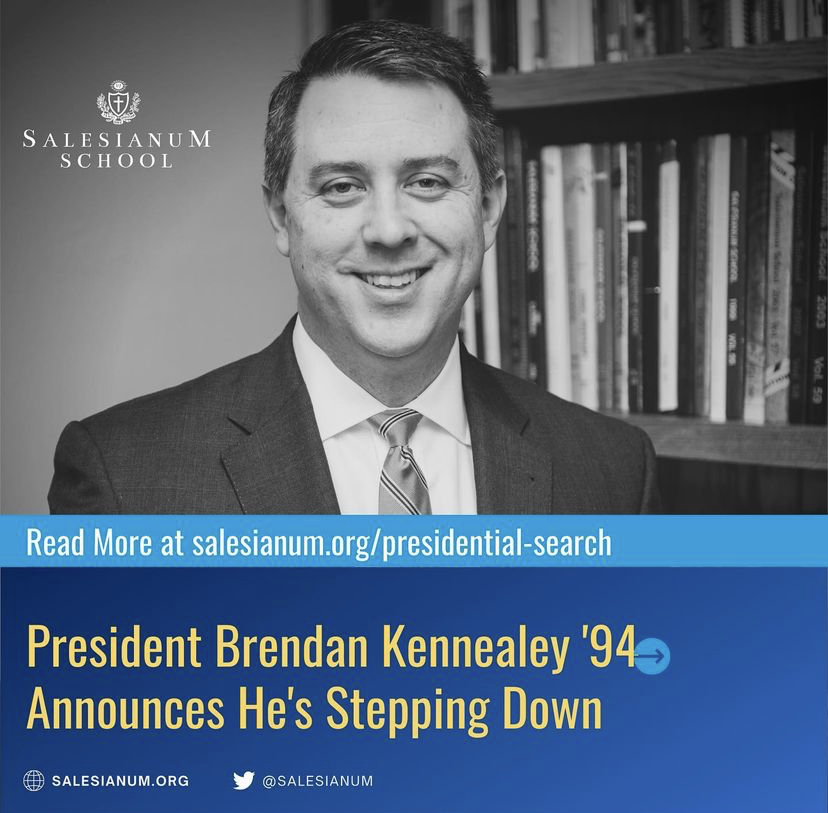 On June 30 Brendan Kennealy, Salesianum’s fourth President, is stepping down after a memorable ten year term. His successor, Tom Kardish, will take the post of President on July 1, 2021. For the last six years, Mr. Kardish served as the President of Villa Joseph Marie High School, which is an all girls Catholic College Preparatory school in Pennsylvania. Villa Marie, much like Sallies, was founded by a religious order, The Sisters Of Saint Casimir.

Mr. Kennealy received a degree in Psychology from Boston College and a degree from Harvard Business School. Before Mr. Kennealy came to Salesianum, he began his career in education as a volunteer teacher, and later became the founding principal of a Nativity Preparatory School in Massachusetts. He later returned to Wilmington and worked alongside the Oblates of Saint Francis de Sales to establish Nativity Preparatory School in Wilmington. After establishing Nativity Preparatory School, he created the Benebikira Sisters Foundation, an organization that raises both funds and awareness for schools, and health clinics in Rwanda. Mr. Kennealy furthered his qualifications for his future job at Salesianum by taking on the title of Superintendent for the Archdiocese of Boston. He has also been a part of the boards of his foundation, the Benebikira Sisters Foundation, DeSales University, and Ursuline Academy. Throughout his time before Salesianum, Mr. Kennealy showcased the qualities of a Salesian gentleman. This later resulted in Mr. Kennealy taking the position of the fourth president of Salesianum.

After a successful 10-year career at Salesianum, I asked Mr. Kennealy some questions that would help to reflect the things he did and experienced as both a student and President of Salesianum. One of his favorite memories from being the President of Salesianum was of Fred Smith.  Mr. Smith was one of the first five African American students to integrate Salesianum.  Mr. Smith did not receive his graduation diploma from Salesianum because he went to the Navy immediately after graduating from Salesianum. Over a decade later, Salesianum was able to recognize Mr. Smith’s service, as a veteran, and delivered his diploma to him in a special ceremony.

I asked Mr. Kennealy if he had any advice for underclassmen and new staff.  He replied by saying that the Salesianum community is a tight knit community, and that we should be there for one another and allow others to be there for us. He also said that although history and tradition are an extensive part of who we are as Salesians, it should not stop us from breaking barriers.   We are only where we are because others who came before us broke barriers, and boundaries. We have to define our own era and cannot be defined by those before us.