The Rebel-Held Territory of Idlib and Assad’s Syria 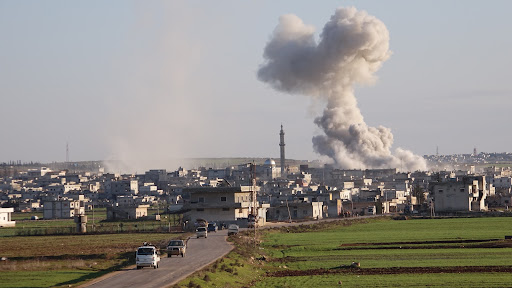 In the province of Idlib in northern Syria, airstrikes are a regular part of life. The rebel group known as the Syrian interim government is fortified in this province, fighting a war of drone strikes and missile launches. However, there is a catch. When Syrian dictator Bashar Al-Assad’s forces return fire on the rebels, they are entirely non-discriminant in their targets. In October of 2016, the Syrian-Russian coalition conducted an airstrike on a school compound in the small village of Haas in Idlib, killing 35 and wounding dozens more. In the following days, an article by the Guardian revealed that there were no rebel forces present in the village, making this strike a war crime under United Nations’ law.

In a war that has caused the internal displacement of almost 7 million people and the creation of roughly 6 million refugees, the humanitarian impact of Al-Assad’s regime is on full display. In the refugee camps in Turkey and other surrounding states, poor conditions and lack of international aid made prime breeding grounds for Islamic state (ISIS) fighters, who then added a third faction in the Syrian civil war, further destabilizing the region. As in all cases, the civilian population lost. Since 2011, roughly 200,000 civilians have been killed, with the Syrian government being responsible for approximately 3 out of every 4 of these deaths.

Today, close to four million civilians are trapped in Idlib province, and with the Turkish border closed out of concerns over capacity in refugee camps, Syrian families are trapped in Assad’s crosshairs with nowhere to run. In the first week of the new year, Russian bombing has knocked out water infrastrucure, leaving thousands without water. Additionally, raids on camps for displaced families have killed two children and a mother, according to Reuters. With rebel forces holding strong in Idlib, civilians in the province are left between a rock and a hard place. Russian bombings continue to destroy families and keep citizens living in fear. With no end in sight, the people of Idlib continue to look for ways out of the province, to save their families and protect the futures of their children. As a catholic publication in this time, we must remember the biblical quote, “When a stranger resides with you in your land, you shall not wrong him. The stranger who resides with you shall be to you as one of your citizens; you shall love him as yourself.”