The Godfather of Philadelphia Sports 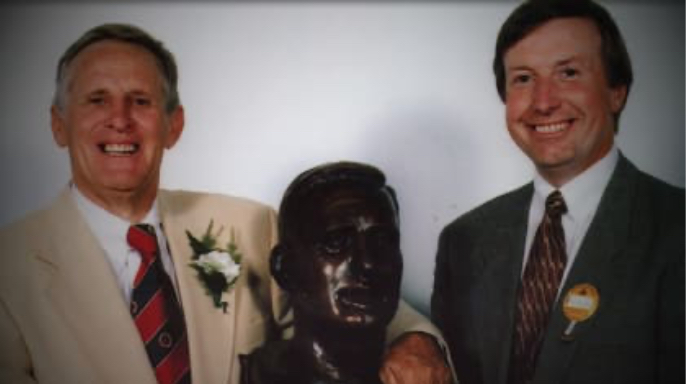 Didinger was there from the beginning. He witnessed the ups and downs of the Philadelphia Eagles franchise, including the move from Franklin Field to Veterans Stadium, the Dick Vermeil era, the end of the kelly green, and the Eagles’ Super Bowl win in 2017. The city looked to Didinger when there was no hope in Philly sports.

Didinger graduated from Temple University in 1968. He started covering the Eagles for the Philadelphia Bulletin in 1969 and eventually joined the Philadelphia Daily News in 1980. He has been a member of NBC Sports Philadelphia/CSN since 1998 and has covered the pre- and post-game shows since. Didinger was the first writer elected to the Philadelphia Sports Hall of Fame and he made it to the big stage when he was elected into the Pro Football Hall of Fame in 1995.

Didinger received six well-deserved Emmy awards for his work at NFL Films. Didinger recently won the Reds Bagnell Award via the Maxwell Football Club for his contributions to the game of football. Didinger is a five-time Philadelphia Sportswriter of the Year winner awarded by the National Sportscasters and Sportswriters Association.

Didinger recently wrote a play describing the relationship between he and legendary Eagles wide-receiver Tommy McDonald. When Didinger was ten years old, he carried McDonald’s helmet to the locker room after he practiced in Hershey each day. A relationship blossomed from there. Didinger spoke to director Joe Canuso about developing that relationship into a play. Didinger had an instinct that the play would be a hit, and boy was he right. The play, Tommy and Me, showed Didinger’s desire to help his childhood hero when McDonald retired. Didinger urged the Selection Committee to consider McDonald for the Pro Football Hall of Fame, but they wouldn’t budge. Didinger’s efforts eventually prevailed and Tommy McDonald was inducted into the NFL Hall of Fame in 1998. Thanks to this relationship, it was Didinger that McDonald asked to give his introductory Hall of Fame speech.

Philadelphia Eagles owner Jeffrey Lurie recently spoke of Didinger stating: “Ray is a consummate professional who analyzed the game with tremendous passion and thoughtfulness. He has been an influential voice on the Eagles Hall of Fame selection committee, providing valuable insight and historical perspective for many years. On behalf of our organization and Eagles fans around the world, we congratulate Ray on a tremendous career and wish him all the best in retirement.”